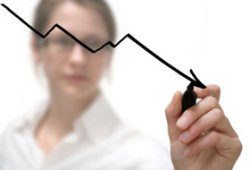 Adjusting marketing strategy and the marketing plan to maximise opportunity in a downturn is the focus of this paper by Henry Newrick.

Many readers may have a sales or sales management perspective and could be reading this at any point in the wax and wane of a business cycle however, the marketing arguments convincingly postulated below seem equally applicable to prospecting and other sales lead generation activities, hence the inclusion of this powerful study by Henry Newrick:

Over the past 43 years I’ve managed publishing companies in 3 continents and during that period have seen a number of business recessions but none as potentially as bad as the one that assailed us in 2008/2009.

When a recession hits and a company’s sales decline the first thing that most financial controllers seek to do is curb costs. Normally this is a prudent decision.

One way is to not take on new staff and if the situation is really bad to make redundant a number of existing staff or as is happening in many cases, get staff to take a pay cut. Another is to slash staff training.

Instead of travelling business class executives may now have to fly economy or even, horror of horrors, travel with one of the low cost airlines.

Another time honoured way in which accountants seek to control costs is to slash a company’s marketing / advertising budgets.

During the Great Depression of the early 1930’s Joseph Kennedy (father of the late President Kennedy) made a fortune on the stock market, selling at precisely the right moment and then buying back in. Reputedly he chose to sell (the market was then at its peak) when one morning on the way to work he stopped for a shoe shine, and the young lad who had been listening to all the gossip gave Kennedy his tips on what to buy.

Kennedy’s reaction was that if the shoe shine boy was in on the act then the market was mad and he sold his investments within days. He later bought back in when the market bottomed, and the rest as they say is history, for without old Joe’s wealth it is highly unlikely that the Kennedy brothers would ever have ascended in politics as they did.

As I write this Warren Buffet, that canniest of investors, and soon to be again richest man in the world, is in the news. He has been doing his usual thorough analysis of companies and where the fundamentals are sound has been buying large blocks of companies for a fraction of what he would have paid, had he invested months ago.

He understands the economic cycle and knows that despite the current turmoil the laws of economics have not been repealed. The moral of the above anecdotes is that when everybody else is panicking and selling then is the time to buy.

It’s called a contrarian approach to investing, and adopting this philosophy has been the keystone to the fortunes made by many successful businessmen and women.

What has this got to do with marketing strategy and advertising?

Everything! Over the years there has been a lot of research into companies and how they grew their market share. Almost without exception it can be shown that the really successful companies were the ones that far from cutting back on advertising in an economic downturn they actually increased it. In this way they were able to magnify their exposure in the marketplace often for little more than they had been paying in the past.

This increased exposure came about because many of their competitors, influenced by financial controllers, cut back on advertising and so the marketplace was not as cluttered with ads as it had previously been.

Secondly, many of the mainstream media (papers, magazines, TV, radio) were feeling the pinch through lower ad revenues and so were much more willing to negotiate rates or do deals – something they would not have considered when the good times were rolling.

Another benefit that flows from continuing to advertise in the difficult times is that when the good times do come round again and the economy booms once more then the media ought to respond more favourably to deals proposed by advertisers who supported them through the hardship period, rather than from those who had simply abandoned ship when the going got a bit rough.

Research has shown that advertisers who carried on advertising (albeit it more selectively) during difficult economic times generated a far greater brand awareness among the public so that when the economy improved they had a definite edge over their competitors.

In undertaking research for this paper here is what I found. A year ago the economic horizon looked pretty bright. Now all that has changed. The FTSE 100 has dropped by a massive 21% in the past few days and companies have seen £250 billion of their values wiped out. Credit has tightened to the point where for many businesses it is now non existent. People are not spending, fearful for the future. We’re on the brink of uncertainly with economists, bankers, business people and politicians unable to stop the freefall that is currently taking place in the market.

Almost everybody is agreed on at least one thing – the economy is about to turn sharply downwards and prudent managers must plan to meet the situation.

Yet for cool heads – these are exciting times, and potentially great opportunities lie ahead. Cutting Costs For many businesses when confronted with a falling off in demand for their products or services, the first priority is a pruning of costs and overheads. But where do you start. Many businesses are beginning the process by cutting back on advertising expenditure. This is an easy target. After all, they reason, if jobs are cut and prices continue to rise, people won’t buy as much. And there’s no point increasing production because the goods will only pile up – hence the 4 day working week now being adopted by some companies. Advertising, the businessman / accountant feels is the one overhead that can be safely and logically pruned in these uncertain times.

According to history however, such an approach is quite wrong, and cutting advertising could seriously damage or even destroy a company’s future. Not only should advertising be maintained but there are great opportunities in the current economic climate for companies to increase their market share.

When You Stop Advertising

There is the story told that during the Great Depression (the name of the company escapes me) there was a very successful business that not only maintained but was actually growing its market share while others were falling by the wayside. In part this was due to an aggressive and high profile ad campaign run by the company’s founder. The business was so successful that the elderly owner had been able to send all his children to college and then on to university.

In particular he looked forward to the day when his eldest son graduated with his business degrees and would be able to join him in the enterprise. Well that day arrived and his son joined the company with a view to eventually taking over and allowing his dad to retire in comfort. Remember now that this was 1932/33 and the Depression was at its height. So the first thing the son does when he comes on board is to say to his dad that he has to cut costs. “Don’t you know that there is a Depression on?” the young college graduate intoned.

The old man acknowledged this but also said that so far he had been lucky and that he hadn’t felt any adverse effects from it. “But Dad” the son protested “You’ve got to cut costs. Otherwise we’ll go out of business”. And so duly persuaded by his son (who after all did have a university degree and was therefore much wiser!) the old man cut back a little on his advertising in order to reduce costs.

There were no immediate effects on the business but after a while sales did seem to tail away a little, and armed with this evidence the son now said “Don’t you see Dad, we’re losing sales. We’ve got to cut back”. And so by a process of falling sales and gradual cutbacks the business finally ended up doing no advertising at all – and within 12 months of the son having joined the company it failed along with all the other businesses that had also ceased to advertise during those difficult times.

When you stop advertising here is what happens: Part 2

If you need to create winning marketing strategy or improve a marketing plan, we can help. Telephone +44 (0)1392 851500. We will be pleased to learn about your needs or talk through some options. Alternatively Send email to custserv@salessense.co.uk for a prompt reply or use the contact form here.